a blog by Tim Melton… 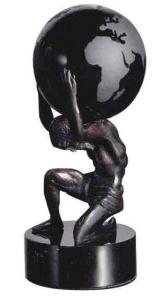 I cannot change the World
but it is in my Blood to Sweat and Toil and Try
To Work and Groan and Strain until the day I Die
Yet in these fires of futile striving, amid the anguish of my cries,
I find the World is much greater than my feeble fight to make it free.
So in defeat, with head bowed low, in broken pride and humble dust,
I recognize that God has made me not
to Change the World and make it just,
but instead
He’s made the World…
to change me.

Our sinfulness works in weird ways. Somehow we have within us the concept that we can “change the world”. It bleeds out all over the place – in movies and novels, in TV shows, in goofy Oprah episodes, through the empty platitudes of jack-leg theologians, and in music. Do you remember the awful 80’s anthem, “We are the World?

“We are the world, We are the children, We are the ones who make a brighter day, So let’s start giving, There’s a choice we’re making, We’re saving our own lives, It’s true we’ll make a better day, Just you and me.”

It’s all over the place. Everywhere you look, people are saying, ‘We can change the world if we just try hard enough!” Whatever.

Christians know that this is impossible. We can’t change it. But that doesn’t stop us from trying. We forget about stuff. We forget that back in the garden of Eden, after the fall of man, God did something terrifying. He “cursed us”. (Remember, Sin came from us…The Curse came from God). He cursed our crops. He cursed our bodies. He cursed our work, our communication, and our relationships. He cursed it all. This Curse is designed to humble us; it is aimed directly at our pride, so that everything we attempt, in our own strength, will come to ruination. The curse shouts up from the very soil we dig in – “You are broken, Tim. You are broken and, left to yourself, you cannot change a thing”.

You would think that this would be enough. But God wasn’t finished. He added something that humbles us even further – The Law of God. Like handing an anvil to an already drowning man, God brought the Law down from Sinai and we were crushed underneath it’s weight. For those outside of Christ, the Law is designed to condemn – to leave mankind without excuse before a Holy God. To those who call upon Christ, the Law is like a flaming sword that over and again tutors us back to our Savior. In fact, when John Calvin described the Law in regard to believers, he said, “For the children of God the knowledge of the law should have the purpose of dismissing the stupid opinion of (dependence upon) their own strength, they come to realize that they stand and are upheld by God’s hand alone; that, naked and empty-handed, they flee to his mercy, repose entirely in it, hide deep within it, and seize upon it alone for righteousness and merit. (Calvin, Institutes, 356, 357).

Now to be sure, God does call believers to do redemptive work in this world. But that work is meant to be done in dependence upon Jesus. It is a Spirit produced, Spirit enabled work, that is rooted in the hope of Christ’s return. And, to be sure, God also calls believers to obey the Law. His decrees are not mere suggestions. They are not given with a wink. But, again, this is to be done by depending upon the Spirit; by casting ourselves upon Christ. Just as John Calvin says ‘we must hide deep within Jesus, flee to his mercy, and repose entirely in His love.’

Yet, even as the Cursed World and the Law of God work in concert to humble me, my pride still whispers, “You can do it, Tim. You can change the World. You don’t need Christ. Take control.” Thank God that the Law and the Curse continue to kick my ass back to Jesus. That in the ‘fires of futile striving’ I am driven back to His precious nail scarred feet. Thank God that the Spirit of Christ is stronger than my independent inclinations; greater than the World; yes, greater than the very Law of God itself.

5 thoughts on “World Changer – A Poem by Tim Melton”

Is Jesus A Burden? Elyse Fitzpatrick I Descend Into... Wishes and Dreams
Reading

Sacrosanct: secure from violation, profanation, assault, or trespass
Gospel: the good news of Jesus Christ, who rescues us from the wrath of God and secures for us His eternal favor
%d bloggers like this: